In 1906 the Netherlands had seen it’s first charity postage stamps. This was a set of three stamps with the value’s 1 + 1 cent, 3 + 3 cent and 5 + 5 cent. These stamps were sold from 21 December 1906 till 4 January 1907. The stamps themselves were valid for franking till 1 February 1907 and only for domestic mail. All postage stamps that were not sold had to be destroyed by following the rules. However the board of the TBC society in Amsterdam asked the postal authorities if they could have the remaining stock for free to sell to philatelists. This idea was accepted without any problems, since the society asked if they could be cancelled. So the remaining stamps received the large round postmark 31 Jan 1907 (10-12N). The 10-12N stands for the latest time indication possible in a large round postmark on a day, 10-12 PM.

It would take roughly 2 stamps per second to be cancelled. With roughly 2.220.000 stamps remaining this would come down to about a stunning 300 man hours. So more than 6 weeks of cancelling for one person. That it would take a long time can be found back in the history of advertising for selling these mass cancelled stamps but also the fact that at some stage the postal worker made the mistake of placing the wrong date in the postmark 17 APR 1907 (2-3N). This date is only recorded on the 5 cent and by the scarcity of these stamps assumed only a couple of sheets would received this postmark before it was corrected.

There are no records for this but it can be assumed that the post office of Amsterdam, which had to cancel these stamps did not placed a person on it for six weeks straight. It is more likely that it was done in the quieter hours of the post office.

Many collectors around the world, specially non Dutch orientated, do not know this and sell or buy these sets for a x percentage of the 70 euro cat. value.
Beside the normal readable strikes there are also strikes that are so difficult to pick from truly used examples.

These strikes have placed so decentred that stamps are recorded with corner strikes or partial readable strikes were the date is barely till not visible. The collector has to be careful for this and always try to find the indications of the large round postmark of Amsterdam, the date 31 Jan 1907 or a part of that and of course the time 10-12N. Below are some sheet parts showing how decentred these postmarks were placed.

So watch out next time you want to buy or sell these stamps and check them first if they are truly postal used examples!

The 2½ cent postcards with the stamp image of King Willem III, issued in July 1889 are recorded with advertisings from the well known Dutch stamp dealer G. Keiser. The question collectors of Netherlands and/or Suriname postal stationery will have is, why is there a advertising from a Dutch company on a postcard from Suriname?

In October 1906 the Government was clearing out remaining stocks of demonetised (31 January 1906) stamps and postal stationery. To gain some money from the stamps rather than spending money on destroying them,  it was decided to auction them off via the Government Auctions.

A part of the postcards ended up after the Government Auction at the stamp dealer G. Keiser & Zoon. On auction were 50 packs of 40 cards x10 of the 2½ cent and the same amount for the 2½ cent with attached reply card. Due to this large stock of postcards being auctioned the reason for the many offers for unused versus used cards seems answered. Beside that the 2½ cent postcards were only mentioned to be used inside Suriname, since that was the domestic postcard rate and it was explicit forbidden to send them to foreign destinations as the French text on the cards was missing. However uprated postcards to foreign destinations can be found.

The question is what is a dealer going to do with so many unused postcards, while the market is satisfied with the demand.

The stamp dealer G. Keiser decided to use them as advertising cards for his business. The normal postcards and postcards with attached reply card, where separated and overprinted with the advertising of his business in black and blue. It is not known if he sold the advertising postcards or handed them out as some kind of business cards, but the latter seems more appropriate to assume.

Which combinations are recorded?

So far the normal 2½ cent postcard is only recorded with the advertising printed in black, see image above.

The 2½ cent postcard, outward card, is only recorded with the advertising printed in black, see image below. 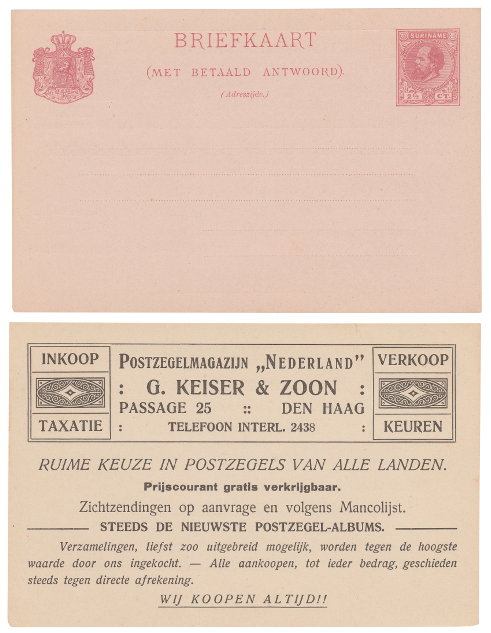 The 2½ cent postcard, reply card, is only recorded with the advertising printed in blue, see image below. 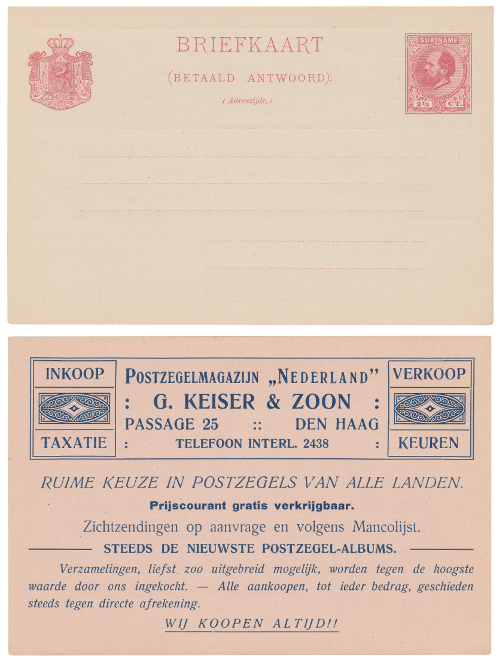 No numbers of overprinted advertising postcards are known, but it can be assumed that quite a few have been made.

For collectors of Suriname postal stationery such cards are a curiosity to add to their collection, but nothing more. 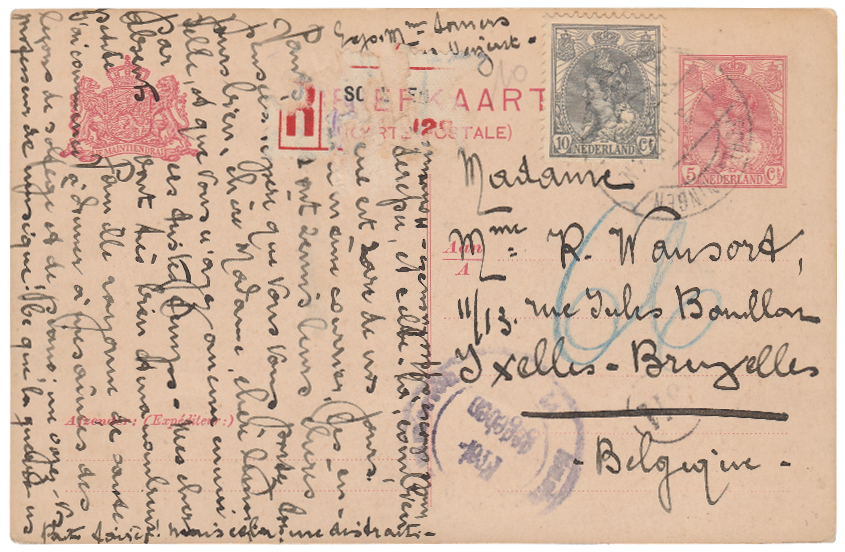